With Buddhism as the national religion, tea culture further blossomed during Goryeo kingdom. The popularity of tea further expanded to literati and public at large. Tea ceremonies were routinely conducted for the affairs of the royal court and Buddhist rituals.

Buddhist events of national importance accompanied ceremonial offerings of tea to the King. The court developed an elaborate ritual for drinking tea. All national events and court ceremonies accompanied tea and included a tea ceremony to the king before serving wine and fruits. Pavilions and arbors were built for the purpose of holding tea parties and poetry readings for court officials. A ceremonial tea-drinking code thus developed in the court. 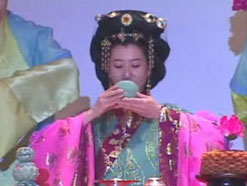